The wildlife experiences of South Africa will exceed any dreams you have had about up-close encounters of the furred kind.

A visit with lions, zebras, giraffes and elephants was definitely at the top of my list on our recent holiday to South Africa, but all safaris start somewhere. The cities of Johannesburg and Cape Town offered an amazing contrast to the wilderness of the safari lodge; a perspective that I wasn’t expecting.

I have no doubt that you’ll love your safari every bit as much as I did, but I hope you also leave South Africa filled with remarkable memories from her unique cities. 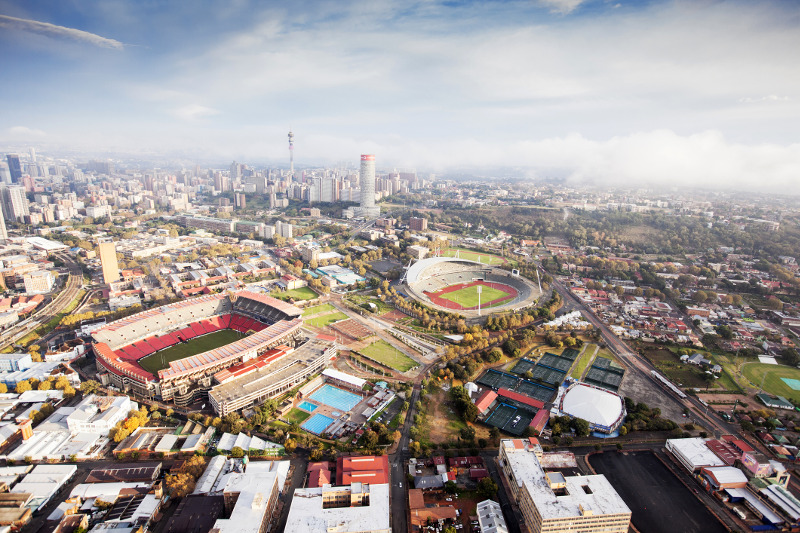 Founded in 1886, Johannesburg is one of the youngest major cities in the world. Photo: Getty

We had a very comfortable flight to Johannesburg with South African Airways leaving the impressive new Perth International terminal at 11.45pm. Our flight landed in Johannesburg at 4:30am, and as we were the only flight in we passed quickly through immigration and arrived at the hotel in no time.

We headed back to the airport to find a tour, where a ‘local tour director’ tried to talk us into a trip to Mandela's house for 1900 zar. We opted for a private car and driver from the hotel for 1300 zar, which turned out to be the best and safest thing to do. 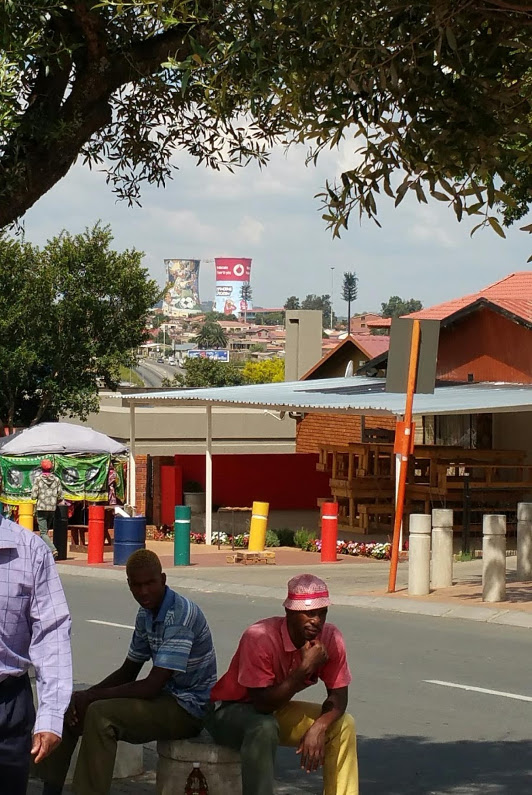 We couldn’t pronounce our driver’s name, Siphiwe which means “gift” in Zulu. Siphiwe grew up in Soweto and still lives there, and he was able to show us all the local sights and provide plenty of information on daily life.

We saw two houses that Nelson Mandela lived in, visited Desmond Tutu's house, and drove past the building where Ghandi worked as a lawyer. At first Siphiwe drove us through the city proper, past the flash mining company buildings, government offices and banks. Eventually we moved into the poorer areas, which were very run down and slum-ish, with lots of rubbish lying around.

There was one part of the city we had to avoid entirely - Siphiwe told us we would probably lose the car! Instead we drove to Houghton Estate, where the wealthy live in stark contrast to the poor areas of the city. There was street after street of massive mansions, all surrounded by gigantic walls with electric fences and the occasional guard.

Throughout our drive, Siphiwe kept offering information and little snippets of history on his city, a completely foreign landscape to what we enjoy at home. 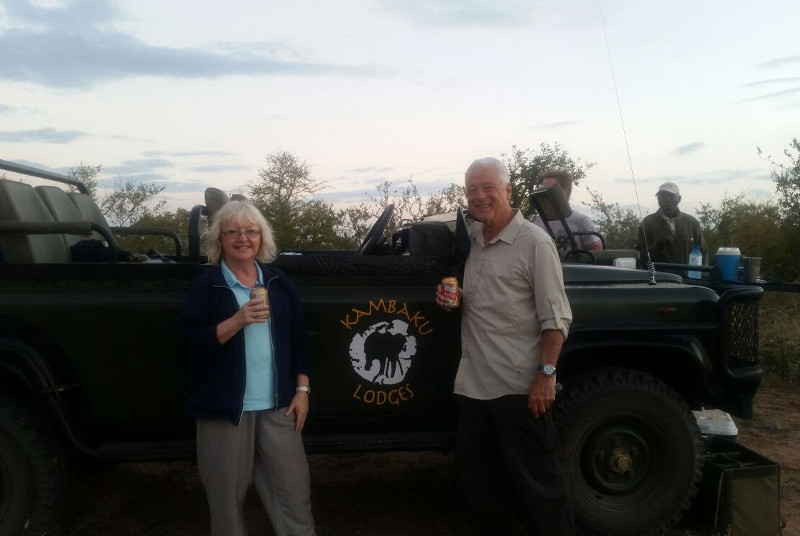 Hoedspruit 'airport' turned out to be a runway and a bit of a shed surrounded by thick bush, but our driver was waiting to collect us and take us to the lodge. She told us the drive would take 45min depending on how many times we had to stop for animals, which sounded promising. 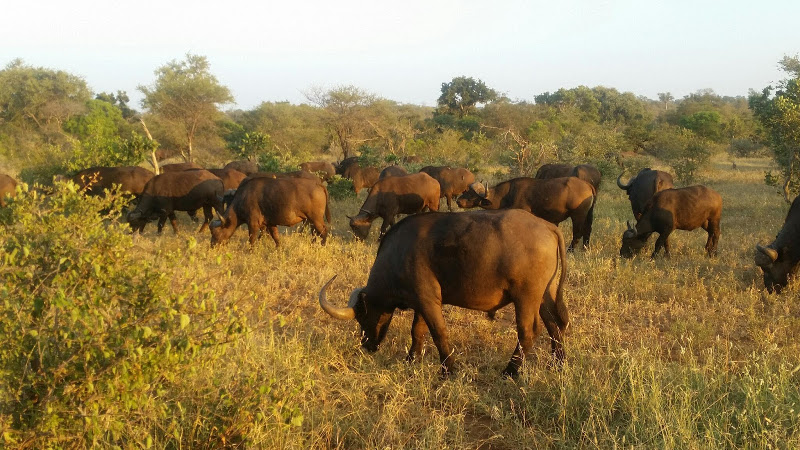 African buffalo can reach up to 170 centimetres in height. Photo: Rita Atkinson

Not long after going through the gate we were thrilled to spot a huge herd of impalas, a tower of giraffes, a large group of water buffalos and a lion under a tree. It was amazing to see these iconic animals you see so many pictures of just a few metres from the edge of the bitumen, totally oblivious to us insignificant humans.  After a while we turned off the main road and onto a gravel track which eventually took us through the gate to Kambaku Safari Lodge. 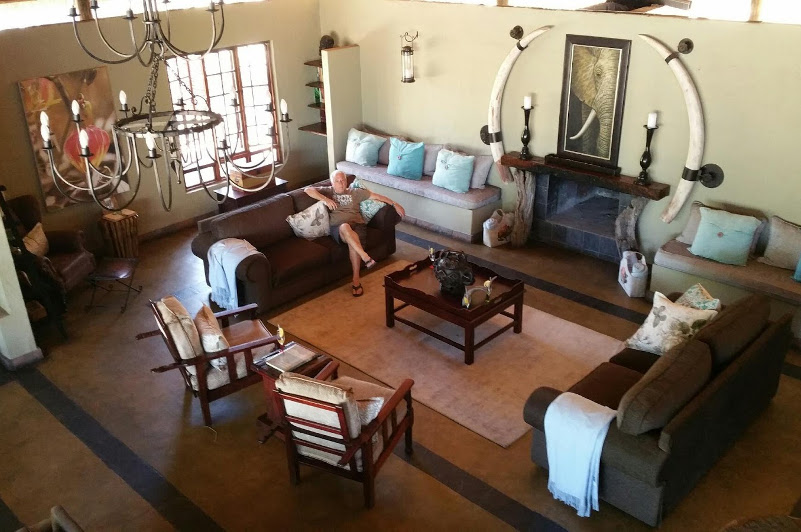 After a cool welcome drink and tour of the camp, we went back to our rustic hut to freshen up for lunch and afternoon activities.

The lodge offers both walking and driven safaris, and at 4pm we set off for a drive with tracker Eric and our guide, Gideon. We could see everything really well from the open Land Rover although I felt a bit exposed. I only felt really terrified twice!

The first time was when we stopped two metres away from a pair of sleeping lionesses and I was the closest person to them. Just as I was starting to relax, one of the lionesses decided it was time to wake up, and started rousing herself right before my eyes. Luckily she found some shade to lie under a few metres away. 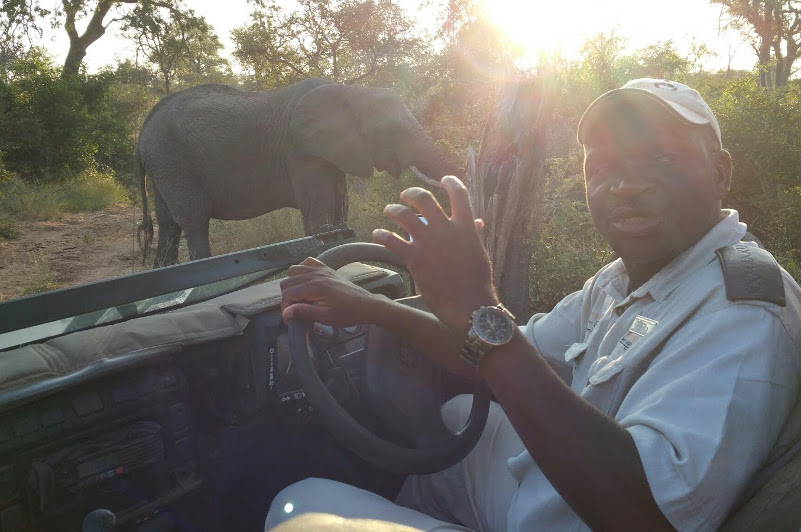 The Kambaku driver was very unconcerned with the proximity of the elephants. Photo: Rita Atkinson

The second scary moment was as wonderful as it was terrifying. We came upon a huge herd of elephants, mostly mothers and babies. They moved through the bush, eating as they walked, and quickly surrounded the Land Rover. I got really worried when a very big one decided to walk up behind the truck and squeeze past my husband on the other side!

Over the next five days we enjoyed morning, afternoon and night time game drives and had incredible animal encounters on every single one.

We saw a pack of hyenas bring down a baby water buffalo, rhinos grazing in a field, and watched a leopard amble past our Land Rover as if she didn’t even see us. I could have reached out and touched her. Another highlight was seeing an elephant calf that was only a week old. 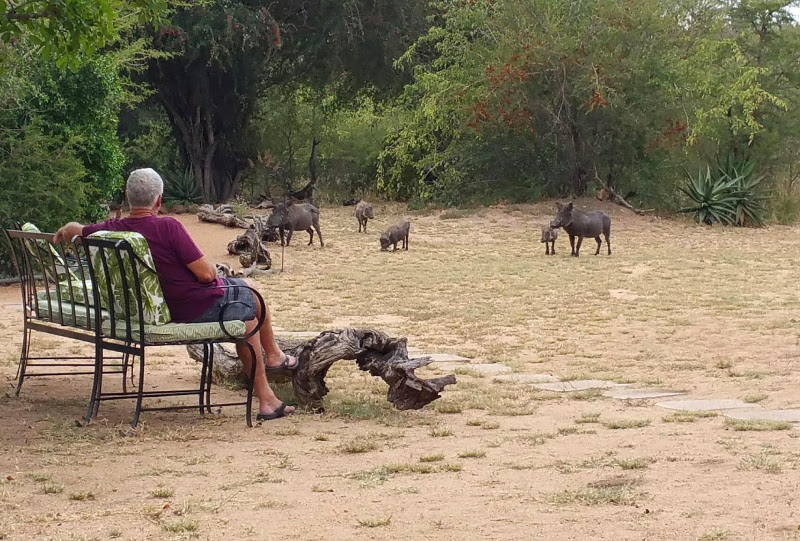 The waterhole near the camp was another wonderful spot for wildlife spotting. We saw cute little warthog babies, the two lionesses who had scared me earlier, and an enormous bull elephant, who visited very early in the morning. We also enjoyed watching several giraffes drinking and lazing in the cool of the evening. 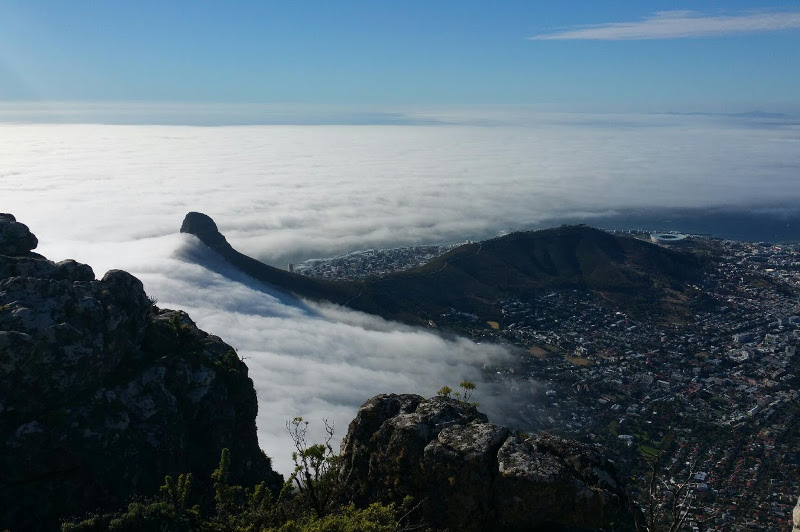 The driver who brought us from Kambaku Safari Lodge to Hoedspruit airport took great delight in telling us he could spell Woolloomooloo and that his Zulu name meant “place where the polecat fell off the rocks and broke its neck”, because that was something that his father saw when he was born.

The tiny Hoedspruit airport was very busy and unfortunately there is no air-conditioning. Although our flight was delayed, check in was very well organised and we easily passed through security and into the departure lounge, which was not much bigger than our games room.

Finally onto the tiny Dash 8 plane for the flight to Cape Town, where we were pleasantly surprised by the free wine and beer on internal flights. 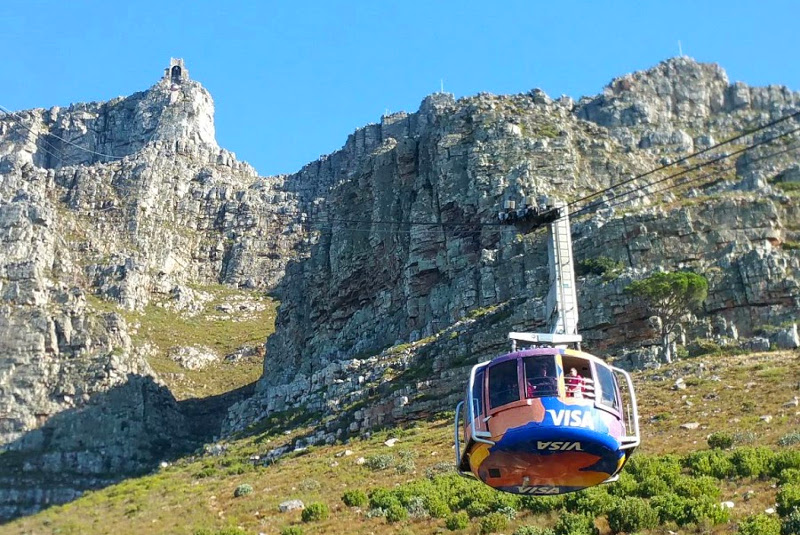 On our third day in Cape Town, the fog cleared enough for us to take the cable car to the top of Table Mountain.

We had to queue for about an hour before getting on the cable car, but the breathtaking view from the top was more than worth it. You can walk around the iconic flat summit easily, and soak up the views of Cape Town, Table Bay and the surrounding mountains of the national park.

There were lots of cute little rock hyrax scurrying around the summit - they look a bit like quokkas without tails. They are fairly tame, and live in the gaps between the rocks. 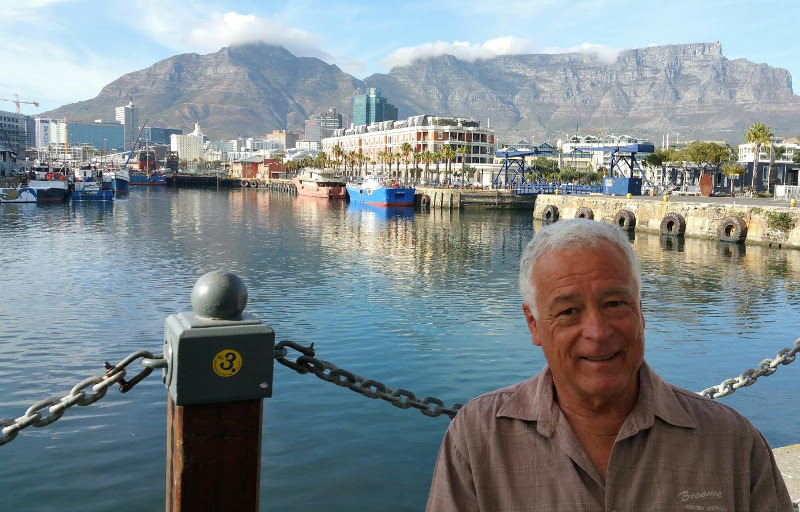 Shopping up a storm

As well as the predictable souvenirs, there are many beautiful things to buy in Cape Town. There are lots of locally produced handcrafts for sale, such as pottery, table linen, jewellery, clothes, paintings, sculptures and wood carvings. The goods are high quality and lovely to look at, but unfortunately much of it wouldn’t make it through Australian customs.

I really liked the handbags made from Springbok skin, which were in all sorts of shapes and sizes and usually had a white, fluffy embellishment. Then there are the life sized animal sculptures, which would look great in the front garden! We could fit an elephant or a rhino at our place, if we managed to get it home.

Back in the Green Market Square area of the city centre, we stood for ages watching a group of African boys dancing enthusiastically to a drum beat, which seemed like hard work, despite their obvious enjoyment. They just kept going on and on; I can’t imagine any Australian kids sticking it out that long! There was also a group of girls dancing on another corner, just for the fun of it. One tiny girl must have been only three years old, and the bigger girls looked after her by sharing their lollies.

On a tour of Hout Bay we saw one of the locals enticing a wild sea lion out of the water with bits of fish. He held the fish between his teeth and the sea lion would take the fish from his mouth. 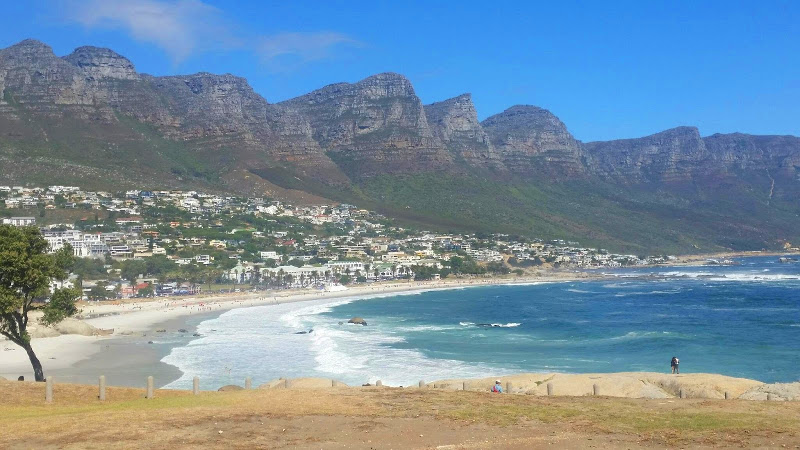 The sweeping beauty of the Cape of Good Hope. Photo: Rita Atkinson

The Cape of Good Hope

Our afternoon tour to the Cape of Good Hope included a very scenic drive along the coastal cliffs past massive mountains and quaint seaside villages. We stopped along the way to try and capture the sweeping views in photos, and climb to the Cape Point lighthouse, where you can apparently see all the way to Antarctica on a clear day.

A highlight was seeing the African Penguins at Boulders Beach. These little black and white darlings are the only penguins to be found on the continent of Africa. 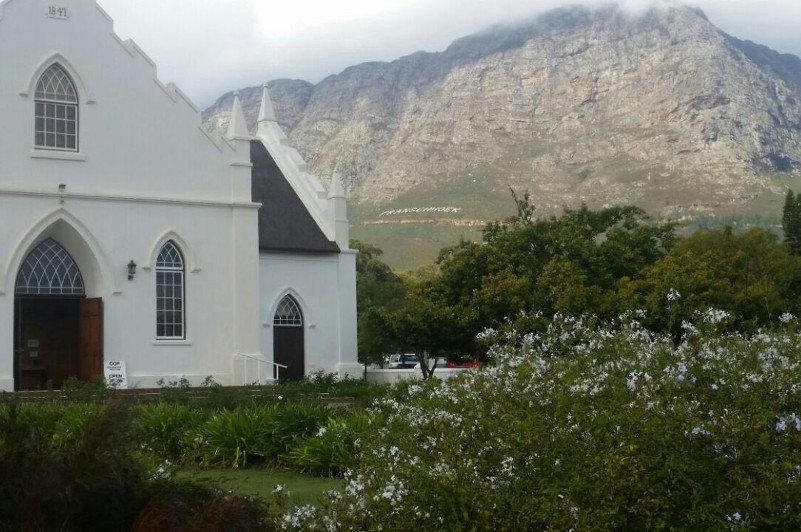 Franschhoek is a little town cradled in the mountains about an hour and a half north of Cape Town.

The town was settled over 300 years ago by the French who planted grape vines and have been producing wine ever since. The picturesque streets are filled with thatched, whitewashed houses, with the occasional ancient oak tree providing shade.

We had tickets for the wine tram tour; a hop on/ hop off trip that visits five or six wineries aboard a cute tram. It was lovely to be able to stay a little longer at the vineyards and wineries that we liked the best.

When we got back to the village we had some time to browse the craft shops and galleries, and we stopped for coffee and gigantic scones, which were served with jam, cream, butter and grated cheese.

Rita booked her South African adventure with the help of Shelley Brice at Brice & Turner Travel Associates in Western Australia. Contact Shelley today to get the ball rolling on your own epic exploration!

Rita Atkinson from Mullaloo WA, is a retired school teacher who has travelled to many interesting and picturesque parts of the world with her husband Mike. As an enthusiastic amateur photographer, Rita enjoys recording their travels in a blog and sharing adventures with friends and family back home. They recently visited South Africa; a trip which provided Rita with many opportunities for amazing photos of this beautiful country. More of Rita’s photos can be seen at: https://500px.com/rmaimages

Tracing the Masters of Modern Art on a Mediterranean Cruise

Where we've sent our clients: Kicking back in the Kimberley
Australia

What to see in Hawaii
27 August 2020
North America